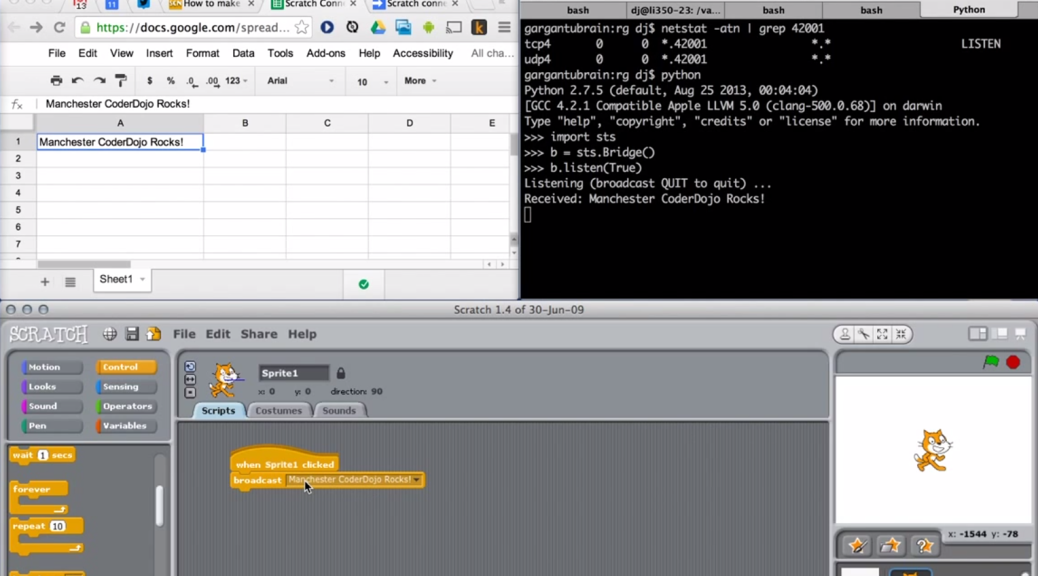 At today’s Manchester CoderDojo at The Sharp Project, we embarked upon our three-month (three-meetup) project to try and build the “World’s Largest CoderDojo Rube Goldberg Machine”.

This is a machine that is part-physical, part-virtual, and is all about connecting up real and online things to build a chain of events that span the physical and virtual, different ages and skill sets, various hardware and software platforms … a chain of events that will do, well, we’re not sure yet, except that it will be a lot of fun.

So we decided to go a step further. Why not connect to the interwebs and place some data somewhere? A good platform for experimentation is Google Apps Script, which is a JavaScript-based glue language running on a platform, with myriad library services, that makes it very easy to manipulate Google Drive content – for example, spreadsheets – and tons of other stuff too.

With this goal in mind, we extended the Python script to send some data to a Google Apps Script, which we set up to act as a published web service (platform-as-a-service FTW!), which in turn wrote data to a Google spreadsheet. No particular reason, but why not? And not only were the results immediately visible, but also in a place that encouraged further linking and triggering.

I recorded a short screencast of all of this in action, showing just a few of the connectivity building blocks we’ll need to build our Rube Goldberg machine.

The screencast is here: http://youtu.be/g3cj9spvMdo

Interested in helping out? Come along to next month’s CoderDojo!